It is always valuable for the festival program when the artists bring freshness to it with their repertoire, which results from the fact that the compositions are not sufficiently known to the general public, and that they are permeated by aesthetic norms related to art music. Duo Pagin, i.e. soprano Sarah Pagin and pianist Aimo Pagin, introduced the KotorArt audience to the music of, first of all, Romanian composers – Pascal Bentoiu and George Grigoriu, as well as Romanian singer Mihaela Mihai. In the Church of the Holy Spirit at KotorArt Don Branko’s Music Days, on Tuesday, August 9, these two artists also performed the works of two French authors – Joseph Jongen and Henri Duparc, and two German – Kurt Weill and Richard Stein. 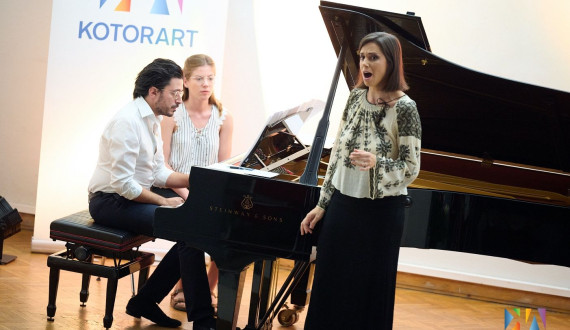 Sarah and Aimo Pagin, began the performance in the atmosphere of the darkened stage of the Church of the Holy Spirit, on which the pianist could be seen emerging, while the singer was approaching the stage from the audience, which was also in the dark, singing the old Romanian song Before I Fell in Love with you [Până când nu te iubeam]. With this gesture, the artists indicated the loneliness that accompanies the musico-poetic content of the song written by folklorist and lexicographer Anton Pann in the middle of the 19th century. By performing it (only) vocally with piano accompaniment, without the dance to which the song was originally connected and without outlining the dancing pulse with some percussion instrument, which can be heard today in various arrangements – the artists focused the listener’s attention on the essence of the music and the emotion that the song conveys. Duo Pagin also presented three songs by the contemporary composer Pascal Bentoiu, which represent the author’s modernist expression, with an intense sound of the piano part and a singing part that balances between diatonic and church modes, with melodies inspired by folklore, passages and a modernist approach to recitative. In addition, the audience also listened to the art song The Music [Muzica] by George Grigoriu, and the popular song If you were a Willow on the Shore [De-ai fi tu salcie la mal] by Mihaela Mihai.

Sarah Pagin performs at concerts and in operas, and with her performance at KotorArt, she has confirmed that her repertoire range is very wide and diverse, which focuses primarily on twentieth century music, and ranges from operetta to musical and cabaret to contemporary classical music. The artist enjoys organizing recitals mixing different styles of music, realizing them with a modern and crossover approach. Her brother, Aimo Pagin, the official Bösendorfer artist, is the winner of several awards and recognitions at international piano competitions. He has performed, among others, at New York’s Carnegie Hall, the Amsterdamer Concertgebouw, the Beethoven-Haus in Bonn, and at the Tonhale Zurich.

In addition to the Chanson roumaine by Joseph Jongen, L’invitation au voyage by Henri Duparc, and Youkali by Kurt Weill, the artists performed as the last piece Sleigh with Bells [Sànie cu zurgàlài] by Richard Stein (known in the repertoire of the Vojvodina tamburitza players as When the First Snow Falls), which became famous even in the interwar period thanks to Romanian singer Maria Lătărețu. Although it was thematically connected with the first piece, and rounded off the performance as a whole, it seems that a more dynamic way to the climax of the concert could have been found with a different distribution of compositions – if they had been grouped stylistically or thematically.