The concert of young artists from the United States of America and Montenegro was held on Friday, August 12, in the Church of the Holy Spirit where they performed for the audience of KotorArt the works of Joseph Haydn, Antonin Dvořák, as well as of contemporary young authors, Slobodanka Dabović Đurić and Dariush Derakhshani. The concert was the culmination of many years of cooperation between the sister cities of Kotor and Santa Barbara and is part of a project implemented with the support of the US Embassy in Podgorica. 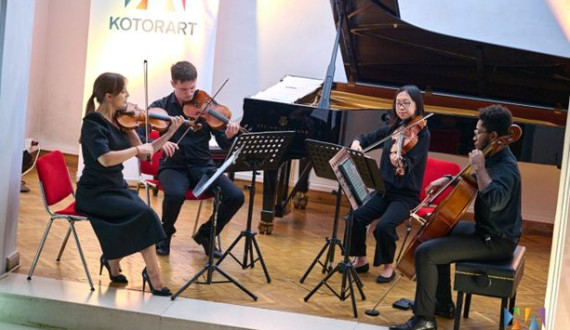 The event began with a moment of silence for the victims of the tragedy that happened that day in Cetinje. The intertwining of cultural identities was not achieved only through the music program and new works. The goal of the project, as the director of KotorArt Ratimir Martinović and the US ambassador in Podgorica, Judy Rising Reinke, emphasized at the beginning of the evening, is the exchange of young musicians and the encouragement of peer cooperation, which should also result in the creation of permanent friendships between them and the strengthening of civil and cultural ties between the two nations.

The concert titled Cultural Intertwining was created as part of the project of the same title with the aim of strengthening Mne-USA ties in order to encourage peer cooperation, exchange and mobility of young musicians, composers and music teachers, and to initiate the composition of new works inspired by the musical and cultural heritage of those countries. During the previous year, each country selected two young musicians to prepare the festival program. Violinist Milutin Radulović, a first-year student at the Music Academy in Sarajevo, and violinist Milena Petković, who completed her bachelor’s studies at the Music Academy in Cetinje and is currently enrolled in the master’s degree program at the Giuseppe Tartini Conservatory in Trieste, were the Montenegrin participants in the project. Students from the United States of America came to KotorArt from the University of California in Santa Barbara (USCB) – violist Karis Lee and cellist Ivan Law. Young artists, of different levels of education and with different performance experience, prepared the program for several days in Kotor, working with mentor Timea Kalmar, Professor of Chamber Music at the Academy of Arts in Novi Sad.

When it comes to the classical repertoire, the musicians performed String Quartet in D minor, Op. 103 by Joseph Haydn and String Quartet in F Major, Op. 96 by Antonin Dvořák, confronting two different epochs, classicism and romanticism. In addition, the program also included two works commissioned by the Festival composed by young authors – Slobodanka Bobana Dabović Đurić from Montenegro and Dariush Derakhshani from the USA. Their task was to present the cultural heritage of their country through one composition, and through another to use a tune from another author’s background in a new work. Thus, Dabović Đurić composed the piece The Gusle Player for string quintet and piano, while Derakhshani wrote the piece (D)evolution, for string quartet and electronics. In these works, the composers presented completely different views on contemporary compositional techniques, as well as in the compositions with citations from the jazz tune Jelly Roll Blues and the klapa song Oh, My Dear Boka. While Dabović Đurić tried to keep the recognizability of the jazz tune in its rhythmic and melodic components, Derakhshani “masked” the klapa song citations through the use of electronics.