The artist whom the Kotor audience listened to during the previous editions of the Festival, a pianist recognizable for his research approach to piano repertoire, his virtuoso and intriguing performances – Kemal Gekić, held a recital in the atrium of the Church of St. Nicholas Franciscan Monastery in Prčanj. On Thursday, August 11, at KotorArt Don Branko’s Music Days, he performed works from a wide stylistic range of romanticism – Liszt, Schubert, Rachmaninoff and Chopin, showing the palette of 19th century compositional poetics and pointing out the performing practices of that era. 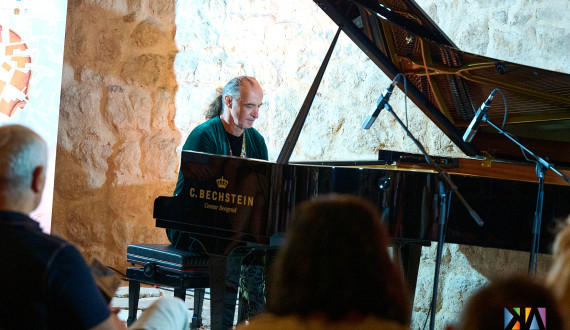 Kemal Gekić, a lifelong member of the American Franz Liszt Society and an exclusive Steinway artist, played at KotorArt on a Bechstein piano, which the Festival rented to be used in spaces where there is no instrument. At the beginning of the evening, the pianist welcomed the audience and, satisfied with the quality of the instrument, expressed his wish for the piano to remain permanently a part of the Festival.

Kemal Gekić is one of the most prominent pianists of his generation, whose release of Franz Liszt’s Transcendental Etudes for JVC is widely considered to be the best recording of this set in the history of pianism. He turned precisely to Liszt to set up a conceptual “frame” of the concert, performing his two compositions at the beginning and the end of the recital. The pianist chose those works in which the composer’s contribution is not original, that is, not all his. Thus, he opened the recital with Liszt’s transcription of Sarabande and Chaconne from Georg Frideric Handel’s opera Almira, and ended with Hexaméron, morceau de concert. Although, according to the person who commissioned the work, it should have biblical symbolism, the name of this work today above all reveals the perplexity of the compositional procedure. Namely, as an example of “collaborative music”, a popular practice in the first half of the 19th century, Hexaméron was jointly composed by Franz Liszt, Frédéric Chopin, Carl Czerny, Henri Herz, Johann Peter Pixis and Sigismond Thalberg.

The central part of the recital was divided into two blocks. Gekić first performed the Piano Piece by Franz Schubert and a selection from the collection of Études-Tableaux by Sergei Rachmaninoff, followed by three Impromptus by Frédéric Chopin. Performing Schubert and Rachmaninoff integrally, without a break, the pianist, with his performance skills, brought the two composers closer stylistically, even beyond the limits where the similarity of their compositional poetics can be detected. In the technically very complex Rachmaninoff’s pieces, Gekić emphasized virtuosity based on a multitude of rapidly changing compositional procedures. Although the pianist, first of all, left  the impression of interpretive superiority, with this performing “bravado” he motivated the audience to listen carefully and patiently. With an insightful and innovative approach to the musical work, Gekić in Chopin’s Impromptus highlighted the peculiarities of the improvisational practice of early romanticism, offered their unconventional presentation and, finally, rendered the compositions more imaginative and creative.