With a concert entitled Traces from the Regulus Constellation, at KotorArt Don Branko’s Music Days, the Collegium Musicum Academic Choir paid tribute to Darinka Matić Marović, a conductor who marked the music scene of the second half of the 20th and the beginning of the 21st century. The choir, led by conductor Dragana Jovanović, performed on Tuesday, July 16, in the Church of Our Lady in Prčanj. The soloist at the concert was soprano Zorana Latković. 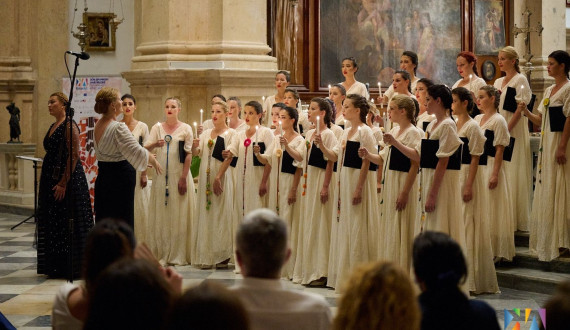 Recognized for her vital energy on stage, decisive and precise leadership of the ensemble, permanent ambition for conquering a new repertoire, striving for innovative interpretation, Darinka Matić Marović received a tribute from the ensemble she led since its foundation in 1971. In 2002, the leadership of the choir was taken over by Dragana Jovanović, a conductor and professor at the Faculty of Music in Belgrade. The program that was performed at KotorArt was divided into several thematic units that through music highlighted one of the traces – spirit, earth and sea, heart, dance, smile, and finally the trace of love.

Through the first and second block of compositions, Dragana Jovanović decided to oppose musical archetypes to their appearance in artistic practice. The concert began with sacred and spiritual Orthodox music, with two prayers to the Mother of God, on the one hand, and two compositions based on the verses of David’s Psalms, on the other. Through the Russian church tune from the 18th century, Hail, O Virgin Mother of God, and the movement of the same title from Sergei Rachmaninoff’s All-Night Vigil, the artists demonstrated sound harmony by focusing their interpretation on the interplay of tone and words. This atmosphere, almost ascetic, is complemented by the technically demanding compositions of Marko Tajčević. Namely, by performing the last movement (verse), Sing to the Lord, from the Four Spiritual Verses, a piece that is considered one of the most difficult in Serbian choral literature, the artists showed excellent performing qualities. The archaic language of Tajčević was also a link to another corpus of compositions, in which the archaic sound is presented in its secular form. In other words, the thematic block titled the Trace of the Earth and the Sea included the traditional song from Serbia, Come the Rain, Grow the Grass, recorded by a collector of folk tunes Miodrag Vasiljević and, in contrast to its modal sound, Coastal Melodies by Stevan Stojanović Mokranjac, with citations of the resonant, Mediterranean sound of major keys.

The central part of the concert was dedicated to the compositions Coda by Žarko Mirković (premiere performance), Musandra II by Toma Prošev and Scherzo in “SH” by Dragutin Gostuški, all dedicated to Darinka Matić Marović. Hence the title of the block A Trace of Heart. What the choir is also recognizable by is singing with movement, which was especially expressed in the Trace of Dance, in the compositions A Meadow by Zapro Zaprov and My Darling by Ilija Rajković. After Boro Tamindžić’s Three Funny Miniatures from Montenegro and Nemanja Savić’s Krajina Songs, all belonging to the Trace of Smile corpus, the choir went singing outside the Church of Our Lady, inviting the audience to do the same. Directed by Branislav Stefanović, the concert ended in front of the Church of Our Lady with the song Oh, My Dear Boka.

Although the ensemble does not have stabile members, as it is made up of current Belgrade Faculty of Music students, the quality of vocal technique, the diversity of the repertoire and the innovation of the interpretation are constants recognized around the world, at more than three thousand concerts held in Europe, countries of South America, Asia and the United States of America. The musical traces drawn in the Church of Our Lady in Prčanj will remain a confirmation of the successful work of this unique women’s choir, led by conductor Dragana Jovanović for many years; and the trace of Darinka Matić Matović, whose voice (speech) was literally broadcast between thematic blocks at the concert, will be permanently engraved in the memories of the audience, because it already is in art and history, and maybe somewhere high up there, in the Regulus constellation.